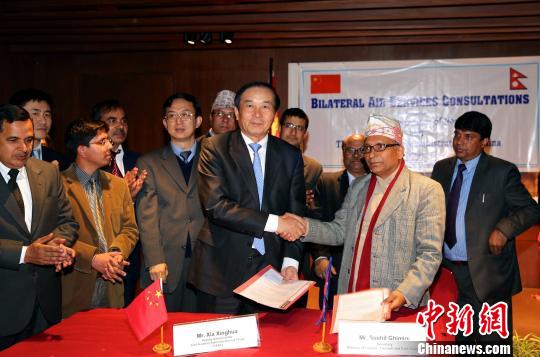 KATHMANDU, FEB 24 - Nepal and China signed a revised bilateral air services agreement (ASA) on Monday, permitting the operation of 56 flights per week with any types of aircraft on a reciprocal basis. Under the old ASA, Chinese airlines were allowed to operate 14 flights per week.
Moreover, under the revised pact, an additional seven flights per week will be added annually to 70 flights per week by 2016. "The ASA will be revised if one of the two countries feels the need for more than 70 flights a week," said Suresh Acharya, joint-secretary at the Ministry of Culture, Tourism and Civil Aviation.
The revised agreement has given unlimited traffic rights for cargo-only flights with any types of aircraft. It has also permitted bi-lateral and third-party code-sharing by carriers of the two countries.
Meanwhile, China has allocated Nepali carriers with a new point, Xian, one of the oldest cities in China, with more than 3,100 years of history. With this new point, Nepali carriers are permitted to fly into seven different points in China-Chengdu, Lhasa, Beijing, Kunming, Shanghai and Guangzhou.
At present, three Chinese airlines-Air China, China Eastern and China Southern-operate scheduled flights to Nepal. China Southern links Kathmandu to Guangzhou, while China Eastern and Air China fly to Kathmandu from Kunming and Lhasa, respectively. "China also agreed to remove the restriction for Nepali carriers to operate in Lhasa. Lhasa will be opened to Nepali carriers anytime if they wish to connect one of the highest cities in the world," said Acharya.
Kathmandu-Lhasa is one of the most expensive routes in the world as one-way airfare stands at $450. Lhasa is connected from a few cities of China, while from outside China, it is only connected from Kathmandu.
China has also "firmly" approved the access of new Trans-Himalaya 1 (Bangkok-Kolkata-Nepalgunj-Indek in Pakistan), 2 and 3 airspaces for international air traffic. Nepal had proposed the three air routes at different meetings of the International Civil Aviation Organisation and other forums.
Among them, the most beneficial route is the Trans-Himalaya 2, and it is the one which required much effort by Nepal to bring India and China into agreement. The International Air Transport Association (IATA) has kept the Himalaya 2 airspace as a future requirement.
Implementation of this airspace will allow international airlines to fly in the Nepali airspace, which means savings in fuel and distance for carriers flying this route and revenue for Nepal. China has published these routes in its aeronautical information publication.
"The Civil Aviation Authority of Nepal (CAAN) and the Civil Aviation Administration of China (CAAC) are scheduled to sign a letter of intent for the development of these three airspaces soon," Acharya said.
However, on Nepal's request on allowing "circle navigation flights" for Nepali helicopters to Kailash-Mansarovar in Tibet, the Chinese side has said it will consider the proposal after holding discussions with the concerned Chinese authorities, Nepali government officials said.
Meanwhile, China's Sichuan Airlines has expressed interest in connecting Nepal in the near future.
Tourism Ministry Secretary Sushil Ghimire and CAAC's Deputy Administrator Xia Xinghua signed the revised ASA on behalf of their respective governments. "With the agreement, our relation with China has strengthened further in the aviation sector," said Ghimire.
The two countries had signed the first ASA in 2003 and Air China opened a direct air link between China and Nepal in 2004. Three Chinese carriers connecting Kathmandu flew 132,326 travellers in the first nine months of 2013-up 30.81 percent year-on-year.()


KATHMANDU - The much awaited revision of bilateral air service agreement (ASA) between Nepal and China has finally been concluded on Monday evening with delegates from both countries signing a new agreement, officials said.
As per the new agreement, both countries can run a total of 56 direct flights to each others' land a week, up from the previous 14 flights.
The agreement signed by Sushil Ghimire, secretary of Nepal's Ministry for Culture, Tourism and Civil Aviation (MoCTCA) and Xia Xinghua, deputy administrator of Civil Aviation Administration of China (CAAC) also said that direct flights between Nepal and China will automatically be increased to 63 a week in 2015 and 70 a week in 2016.
"This way seven direct flights per week can be added every year till 2016 on reciprocal basis," Suresh Acharya, joint secretary at MoCTCA, told Xinhua, adding "even if any of the countries need more flights after 2016, similar revision can be made upon the ASA. "
Nepal and China had first signed the ASA in 2003, following which Air China opened its direct flight operation to Kathmandu in 2004.
Monday's ASA revision agreement has also offered unlimited opportunities in terms of cargo flights for both nations.
Acharya said the agreement has also opened a way for code sharing arrangement between the airlines of Nepal and China.
Nepali officials who participated in the signing ceremony said the Chinese side has also agreed to add one destination -- Xi'an city in northwest China -- for Nepali airlines. So far, Nepali carriers are allowed to run direct flights to seven Chinese destinations, including Lhasa, Beijing, Kunming, Guangzhou, Shanghai, Chengdu and Xi'an.
During the meeting, the Chinese delegates informed their Nepali counterparts that a new airlines company, Sichuan Airlines, was willing to operate a direct flight to Nepal. "As per the Chinese delegates, Sichuan Airlines will soon begin its commercial operation in Nepal," said an official at Civil Aviation Authority of Nepal (CAAN) who was also in the ceremony.
Currently, three Chinese carriers including Air China, China Southern and China Eastern are running direct flights to Kathmandu 's Tribhuvan International Airport (TIA).
Meanwhile, the Chinese side also has agreed to provide Nepal with necessary support to promote its aviation sector including infrastructure, logistics and training.