Testing Times for Democracy in Nepal

The President of Nepal, Bidya Devi Bhandari, on May 22, exercising her power under Article 76(7) on the advice of Prime Minister K.P. Sharma Oli, dissolved the House of Representatives or the Lower House of the Nepal Parliament and announced fresh elections. This decision was taken after political parties failed to form a new government under Article 76(5) of the constitution. The president’s office in a statement said: “While considering the fact that same members have been counted on both sides [K.P. Sharma Oli and Sher Bahadur Deuba], members have supported one another against the party decision and request from the concerned party to disregard their support … both the claims to obtain vote of confidence of the House of Representatives as per the Article 76(5) of the Constitution to be appointed as the Prime Minister do not stand valid.”1 Therefore, neither of them could form a new government by May 21 (9:00 pm), as per the deadline set by the President a day before.

This is the second time the House has been dissolved in last five months. Previously, it was dissolved in December 2020. The Supreme Court, however, had reinstated the House on February 23, 2021, after hearing over a dozen writ petitions questioning the decision to dissolve the House.

Like last year, this time too, the decision to dissolve the House was met with overwhelming resistance from across the Nepali society and the opposition parties. The latter criticised the decision as being authoritarian and anti-constitutional. Prime Minister Oli did not follow the laid out constitutional procedures like testifying confidence in the House within 30 days. He also did not resign after losing the confidence motion on May 10 and again on May 20 this year. The opposition criticised President Bhandari for showing parochialism and also allocating a very short time (21 hours) to the opposition parties to form the government. They have filed writ petitions in the Supreme Court against the decision and a constitutional bench has been formed under the Chief Justice along with four senior judges of the Supreme Court.

Despite the promulgation of a new constitution in September 2015, which was supposed to provide political stability, the country has witnessed a recurring political crisis. The top leaders, often, were more interested in grabbing power by punishing rival factions within the party, splitting parties, and stoking anti-India sentiments to shore up nationalism and hide incompetence. In this context, one needs to analyse three major factors that have precipitated the constitutional crisis in Nepal.

First, the intensification of factional conflict in the erstwhile Nepal Communist Party (NCP) due to the failure of the power-sharing deal between the Oli and the Pushp Kamal Dahal alias Prachanda faction. The said political deal was concluded before the formation of the NCP, which came into being with the merger of the Communist Party of Nepal-Unified Marxist-Leninist (CPN-UML) and the Maoist Centre (MC) in May 2018.  As per the deal, it was agreed that: (1) the two leaders would equally share the prime ministerial tenure, 2) Prachanda would hold the co-chairmanship of the NCP with executive powers, (3) sharing of cabinet seats should be in accordance with the pre-election deal (60:40, the CPN-UML got 60 per cent seats and the MC got 40 per cent seats), and (4) the prime minister and the chairman of the party would consult the senior leaders in party matters.2

Since the formation of the NCP, the top leaders of the party have often accused each other of not abiding by the deal. Factionalism reached its zenith in April 2020, when Oli issued an ordinance on the Political Parties Act.3 The objective was to demonstrate his dominant position in the government and within the party to his rival factions. The motive was also to split both the NCP and also the smaller parties of the Terai region who would join the government in case the rival faction led by Prachanda withdraws support. Most importantly, the Chinese initiative of a new power-sharing agreement between Oli and Prachanda in September 2020 could not prevent the party from forming two separate organisational structures within the NCP.

The intra-party factionalism came to an end after the Supreme Court scrapped the merger of the CPN-UML and the MC on March 7, 2021. However, the legacy of factionalism reappeared in the revived CPN-UML. It is believed that the anti-Oli faction led by Madhav Kumar Nepal had voted against the Oli Government on May 10. Some media reports in fact hinted that Madhav Kumar Nepal’s faction of the CPN-UML had allegedly supported a Nepali Congress (NC)-led initiative to form a new government under Article 76(5) on May 20, 2021.4

Second, there has been a lack of clarity on the interpretation of Article 76 and related clauses as the constitution is silent on the following issues:

Third, there are pieces of evidence of parliamentary procedural lapse by both the ruling and opposition parties. As enshrined in Article 76, the Prime Minister has to test his/her majority on the floor of the House. Oli only did that on May 10. He skipped the process on May 20.  He was supposed to do the floor test on that day since he was reappointed as the Prime Minister on May 13 under Article 76(3). However, he just announced and informed the President that he does not have a majority in the House.

As mentioned in the Nepal Constitution, the Prime Minister has to be ‘relieved’ from the office upon losing the majority in the House. For example, Article 100(6) clearly says “if a motion of no confidence tabled under clause (4) is passed by a majority of the total number of the then members of the House of Representatives, the Prime Minister shall relieve of his or her office.”5 Therefore, as per the abovementioned article, Prime Minister Oli should have resigned after failing to prove the majority in the House.

Interestingly, after Prime Minister Oli’s CPN-UML became the largest party in the House on March 7, 2021, as the NCP ceased to exist as a party, and the MC recalled its ministers from the cabinet on March 13, the opposition parties did not table the no-confidence motion against him.

Implications of the Crisis

The public faith in the country’s constitution and political system has eroded drastically in last one year, since the ordinance related to Political Party Act was issued by the Oli Government in April 2020. The new political system introduced by the constitution has been repeatedly misused by the ruling party. This has set a wrong precedent in the Nepal polity. Public disenchantment towards the new system manifested in a series of rallies and protests. The pro-royalist organisations even began discussing the revival of the monarchical system. During October-November 2020, a series of pro-monarchy rallies were organised across the country.6

Another new trend was division in other political parties in favour or against the constitutional action taken by the Oli Government. For example, factionalism intensified in the Janata Samajwadi Party (JSP), which was formed in April 2020 after the merger of two Terai-based parties - the Samajwadi Party (SP) and the Janata Party (JP). Most importantly, some new political alliances -- CPN-UML and JSP, the NC-led alliance with the MC, the Madhav Kumar Nepal faction from the CPN-UML, and the Upendra Yadav faction from the JSP -- were formed based on political opportunism and without any ideological basis.

These intra-party and inter-party bickerings have impacted governance in the country. The government miserably failed to manage the second wave of COVID-19 as the country witnessed a massive surge in COVID-related infections and deaths, and also a downfall in economic growth. There was an increase in unemployment which forced people to engage in illegal activities like gold smuggling, human trafficking, drug trafficking, etc.

Three former prime ministers of Nepal – Prachanda, Sher Bahadur Deuba and Baburam Bhattarai – have accused Prime Minister Oli of dissolving the Parliament at India’s direction. Bhattarai in his joint opinion piece published in The Hindu on May 29 stated that “…Oli is in collusion with Hindu monarchical forces in Nepal and the Rashtriya Swayamsevak Sangh in India” to dismantle the Nepal Constitution.7 These accusations were made despite India treating the political developments as ‘internal issues’ of the country, and even as the Chinese ambassador conducted open consultation on internal matters of Nepal with political leaders and constitutional authorities of the country.8

The spokesperson of the Ministry of External Affairs (MEA) in a statement issued on May 26 clearly stated that India views the recent political developments in Nepal as “internal matters” of the country to be dealt under its “own domestic framework and democratic processes.”9 Such accusations appear all the more baseless and unfounded because of the following reasons:

First, it may be noted that Prime Minister Oli has been one of the most influential Chairman of the UML since July 2014. He has also been the most powerful prime minister in the post-constitution period. He had secured close to an absolute majority in the House of Representatives due to the merger of the MC with the CPN-UML in the post-election period. His government also had issue-based support from the SP and the JP until the end of 2019. Therefore, he did not require any external support to remain in power and function independently.Second, though Prime Minister Oli’s CPN-UML turned into the largest party in the House after the Supreme Court verdict of March 7, 2021, it continued to enjoy a majority till May 4 as the MC did not withdraw its support to the government. However, his party had to explore the possibility of seeking support from the JSP. As a result, in the emerging new political alignment, the JSP emerged as a kingmaker in Nepal politics following the SC verdict.

From the JSP’s point of view (especially for the Mahantha Thakur faction), the political situation provided a golden opportunity to address the remaining Madhesi issues that were not addressed by the 2015 Constitution. The Thakur faction was more seriously looking towards the redressal of Madhesi issues, unlike the Upendra Yadav faction. The Thakur faction was aware that if their demands are accepted by the largest party in the parliament, then the NC would not oppose this political accommodation because the NC is politically dependent on the Terai region. The Thakur faction also felt more comfortable dealing with the CPN-UML because previously when it tried to negotiate with the NC, it remained silent on addressing the Madhesi demands for the fear of losing hill votes. This was perhaps the reason why opposition parties, including the NC, remained silent on the citizenship ordinance, which the President issued on May 23, 2021.

It is clear that Prime Minister Oli has survived in power due to his strong leadership within the party and in the government, support from the MC, failure of the opposition parties to table a no-confidence motion against his government after March 2021, and finally, due to the convergence of interest between the CPN-UML and the Mahantha Thakur faction of the JSP. However, for now, all eyes are set on whether the Supreme Court would validate the President’s action.

Views expressed are of the author and do not necessarily reflect the views of the Manohar Parrikar IDSA or of the Government of India. 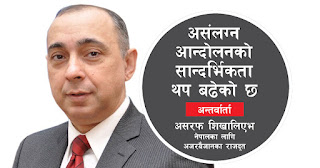